Happy Friday! This week we wanted to share a few details with you about a type of critter we all have had plenty of experience with, ladybugs! They are also commonly known as ladybirds, lady beetles, or even ladybird beetles and, our amazing world is home to over 5,000 different species of them. National Geographic shares that the name ladybug was recorded to be initially coined by European farmers who apparently prayed to the Virgin Mary when pests began eating their crops; and after ladybugs consumed and wiped-out invading aphids, the farmers called them “beetles of our lady” which was later shortened to “lady beetle” or “ladybug.”

So, back to today. One of the most common species of ladybugs that we see in the Driftless is actually an Asian beetle, the Harlequin Ladybird, and iNaturalist data agrees that this was a big year for these insects! Below is a seasonality chart from the Harlequin Ladybird, notice the large peak during 2021, representing a large number of observations during the late spring, and following shortly after another smaller peak. These insects begin to appear more around late September and October as temperatures are beginning to cool and we get the chance to observe this within iNaturalist as we recognize that the insects are currently more visible and searching for safe locations to complete their hibernation. 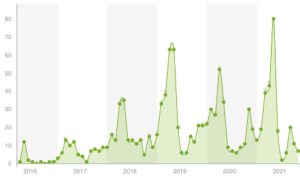 As alluded to earlier, lady beetles are recognized to be adored by farmers as they are known to consume aphids and other crop eating insects as well as lay their hundreds of eggs within aphid colonies for their larvae to feed on. Their aposematic colorations warn predators that they can secrete oily, foul-tasting substances from their joints if they are threatened.

Now, there are common misconceptions when it comes to ladybugs and Asian beetles, below is an image in which I find to be helpful overall in distinguishing the two; the longer, more pointed snout in the Asian beetle is a helpful characteristic to keep an eye out for. 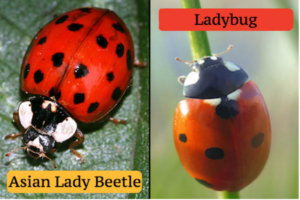 Another thing to be mindful of when attempting to identify species is the source you are using. Below is an example where a said entomologist made a number of revisions to a resource. This is the great thing about iNaturalist and using it to learn about what you are observing, the database uses a number of identifiers before confirming any research grade observations, ensuring a correct identification! 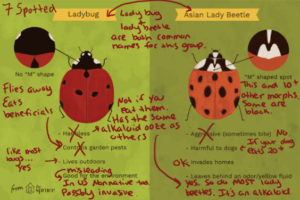 So, we encourage you to do some of your research when it comes to connotating critters! Below is a screenshot from iNaturalist, of some of the different ladybug species that have been identified right here in the Driftless region! Enjoy your weekend! 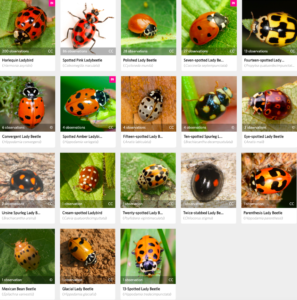