Hello everyone! I hope those of you who attended the Earth Fair this past weekend had a good time! This week I will continue with what my previous blog had been about. I am planning on focusing on different mammals and fungi found in the Driftless Area and the La Crosse County area.

I will start off with fungi because I find them especially interesting organisms. What makes fungi different from plants or bacteria? The answer is that they have chitin in their cell walls rather than cellulose. Chitin is also found in the exoskeletons of crustaceans and insects. Much like animals, fungi are heterotrophs which means they acquire their food by absorbing dissolved molecules. Fun fact: rather than ingesting and digesting like most organisms, fungi digest and then ingest their food! Fungi are also principal decomposers in ecosystems.

Based on our iNaturalist page, in the Driftless Area alone, there were 5,246 observations made of fungi. This includes 638 different species! The most identified species was the Golden Oyster Mushroom (Pleurotus citrinopileatus) with 150 observations. This specific mushro 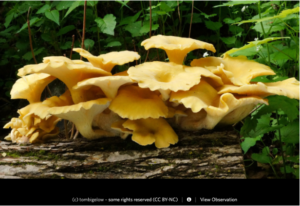 om is edible. It is a gilled fungus that is native to eastern Russia, northern China, and Japan. The fruiting bodies of this species grow in clusters of bright yellow to light brown caps. This species is a wood-decay fungus that primarily decays hardwoods like elm. The primary way that this oyster mushroom spreads its spores is by beetle! 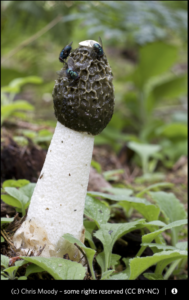 The least observed fungi was the Common Stinkhorn (Phallus impudicus) with only one observation. This particular fungi is most recognizable by its foul odor. It is commonly found in Europe and North America in habitats rich with wood debris. Spores from this species are carried around by insects that are attracted to the odor. It is not usually poisonous to eat, but may be inconsumable for small dogs.

Next, I will talk about the vast amount of mammals seen in the Driftless Area!

Mammals are a group of vertebrates characterized by the presence of mammary glands. Females produce milk for feeding their young, they have a neocortex, fur or hair, and three middle ear bones. The basic body type includes four extremities which mammals use for terrestrial locomotion. In some cases, these extremities have evolved for life at sea, in the air, in trees, underground, or just on two legs. Mammals come in ranges of sizes from 30 millimeters to 30 meters! 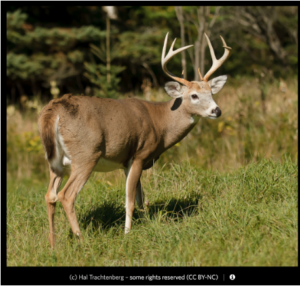 Over the past year in the Driftless Area, there have been 722 observations of mammals which includes 52 different species! The most identified mammal was the White-tailed Deer (Odocoileus virginianus) with 122 observations. This shouldn’t be very surprising because deer are pretty much everywhere! This species is native to North America, Central America, and South America. Deer can be recognized by the white underside of their tail. They use their tail as a way to warn predators that they have been detected. Fun fact: deer have horizontally slit pupils which allows them to see at night!

The least observed mammal was the American Stoat (Mustela richardsonii) with just one observation. This species is native to North America, but more specifically, Canada and the northern United States. Stoat prey on mice, voles, shrews, and young cottontail 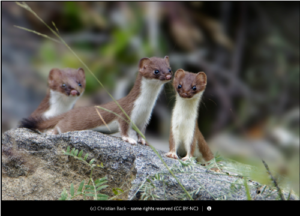 s. Currently, they are listed as vulnerable to extinction in many different parts of the United States.

In the La Crosse County area, there were 135 observations of mammals with 23 different species. The most identified mammal was the Eastern Gray Squirrel (Sciurus carolinensis) with 22 observations. The least observed was the American Mink (Neogale vison) with just one observation.

I hope you enjoy reading these posts as much as I enjoy writing them! I will be back on May 5th with my next post which will focus on insects!

Make sure, if you haven’t already, to join our Nature Challenge on iNaturalist for a chance to win a $50 prize! The person who makes either the most observations or identifies the most species will win! Second place winners get a $25 prize. The challenge will end on September 30, 2022 and the winner will be decided! Good luck and start exploring