Happy May everyone! It’s finally starting to feel like spring! Considering it’s the start of May, I thought I would post about No Mow May and the insects that benefit from it! No Mow May is exactly how it sounds. Homeowners are urged to not mow their lawns for all of May. Why? Mowing your lawn less creates a habitat more suitable for important pollinators like bees. So in the spirit of No Mow May starting, I thought I would highlight some of the insects that would benefit most from this increase in habitat that we are seeing throughout the Driftless Area!

First, I will introduce what insects are and what distinguishes them. Insects are invertebrates which means that they do not have a vertebral column like we humans do. They are characterized as having a chitinous exoskeleton, a three-part body that includes a head, thorax and abdomen, three pairs of jointed legs, compound eyes, and a pair of antennae. Fun fact: it is estimated that insects represent more than half of all known living organisms!

In Emma’s blog, she talked about the Common Eastern Bumblebee which is a marvelous pollinator! 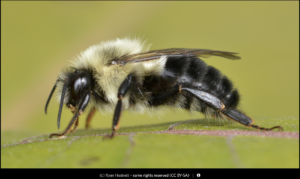 In the Driftless Area alone, the Common Eastern Bumblebee (Bombus impatiens) was observed 363 times! In La Crosse County it was observed 160 times. This species is considered to be one of the most important pollinator bees in North America. These bumblebees make their nests 1-3 feet underground and enter them using tunnels that are sometimes up to nine feet long! Common Eastern Bumblebees are usually used as pollinators for tomatoes, blueberries, raspberries, and pumpkins.

Another important pollinator that would benefit from No Mow May is the Monarch Butterfly (Danaus plexippus). 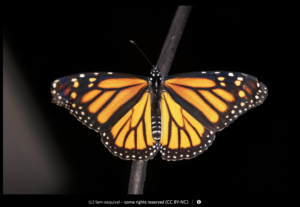 In the Driftless Area, there were 283 observations made of this butterfly! In La Crosse County, there were 51 observations made. Monarchs are a migratory species that migrate twice a year. The population that we see in the Midwest migrates in the fall down to Mexico and then returns in the spring. They primarily feed on milkweed species but are not considered to be just milkweed pollinators. Monarchs also pollinate many wildflowers. These butterflies are considered to be an endangered species mainly due to climate change. An increase in extreme weather events is causing massive mortality events for this species. Also, since we are seeing much warmer falls than previously, their migration is starting later in the season than it should which is also causing death in populations.

Now that I have introduced some pollinator species that would benefit the most from No Mow May, next week I will dive into the different plant species that help these pollinators!

Here’s another reminder to join our Nature Challenge on iNaturalist! The person who makes the most observations or identifies the most species will win a $50 prize! Second place winners get a $25 prize. The challenge ends on September 30, 2022, so be sure to sign up soon! See you next week!