Happy June! We have finally made it to Summer after what felt like a horribly long winter! With it being summer, we can expect to see all sorts of different species emerging. Continuing on from the last two weeks, I will be introducing species that are being seen throughout the Driftless Area with data that is on our iNaturalist page!

To start off, Little Bluestem (Schizachyrium scoparium) has been observed 47 times in the Driftless Area and four times in La Crosse County. 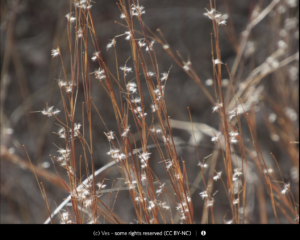 The most recent observation was in April in Prairie Du Sac, Wisconsin. This species is a prairie grass native to almost all of the United States. Little bluestem is drought tolerant and the larval host to many different species of butterflies. Fun fact: it gets its name from the bluish color of the stem in the Spring which turns to red in the fall!

Another recent observation was of Elf Cups (Sarcoscypha) on April 23 in Whitewater, Wisconsin. Elf Cups have been observed in the Driftless Area 78 times and six times in La Crosse County.

This species of fungus is native to Europe, North America, and tropical Asia.  They get their name because of their cup shape and their name comes from the Greek word meaning drinking bowl! Elf Cups grow on dead wood which they break down for food. This fungus is technically considered to be inedible, but there are some instances where people have rather enjoyed them. But like any other fungi you may come across, you should not assume it is edible because a vast majority of them are not!

This unfortunately is my last post! Thank you to everyone who has read them for the past three months! This will also most likely be the last post until this Fall. With that, I will remind all of you one last time to join the Nature Challenge on iNaturalist! The person who makes the most observations or identifies the most species will win a $50 prize! Second place winners get a $25 prize. The challenge ends on September 30, 2022, so be sure to sign up soon!