This week we are highlighting the history of the DABB, Strive 2 Thrive Coulee Region, and their founder, Vicki Miller. When asked how the whole thing came to be, Vicki responded:

I will never forget that summer day when I saw the most beautiful “creature” I had ever seen and it was in my garden. It was a dragonfly called the “Widow Skimmer,” so called because the dark wing markings seem like mourning garb. To me, it didn’t seem mournful at all. It was so beautiful and so alluring that it literally took my breath away! I had always been a lover of Nature and being outdoors, but I realized at that moment that although I was SEEING nature, I never really SAW nature. 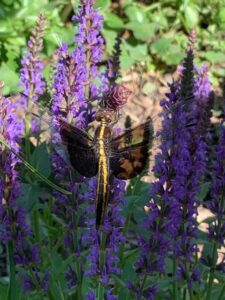 In that instant I was hooked and became a “LOVER of BUGS” (well, almost – although they do play an important role in “nature’s food chain,” I find it’s easier to “love” a mosquito in the winter versus summer!) which then lead me down a path that I’m so very glad I took. The more I thought about it, the more I felt compelled to follow the path, which was — HOW could I find a way to help others to “SEE NATURE” like I was learning to see it.

But I’m getting ahead of myself. Let me back up a little to explain how “Strive 2 Thrive Coulee Region” and “The Driftless Area BioBlitz (DABB)” came into being. Going down various paths and connecting them to programs that engage my community is not a new thing for me. After I retired from Trane Company at the end of 2005, I became a full-time volunteer, focusing my efforts on my two passions: healthy food and sustainability. I volunteered for several local non-profit organizations, learning what I could and connecting with like-minded people until a few years later, I took on a leadership role in a new non-profit called Hillview Urban Agriculture Center, which was involved in the Coulee Food System Coalition and Get Growing partnership. (Hillview eventually merged with GROW La Crosse in 2019 and I continue to be an avid supporter.)

In 2016, while still a board member for Hillview, my husband, Rich, at the age of 79, suffered a spinal stroke which left him paralyzed and in a wheelchair. I immediately withdrew myself from my volunteer activities and focused on my husband’s health. Just like my volunteering, I dove right into his daily care with two goals: keeping him healthy and happy.  The “happy” part was relatively easy because of Rich’s amazing attitude that he had from the start: “OK – I can no longer walk, so now what do we do???” The “healthy” part was more challenging and for the next few years, I was constantly trying to find ways (both through food and traditional and alternative methods) to avoid the most common (and many times deadly) problems for paraplegics: UTI’s, bowel obstructions, pressure sores, respiratory illnesses, to name a few.

Surprisingly, in 2019, not only was Rich doing well health wise, with all of the changes that I incorporated into his daily care, and under the supervision of his nurse practitioner at the Tomah VA, Rich was able to go off of all four of his blood pressure medications (which he had been on for years).  Also around that same time he went from being on the high end of stage 3 chronic kidney disease (which he also had suffered from for years) to his kidney doctor saying he no longer needed to see her! Soon after, at his annual check-up at Gundersen, as Rich’s primary doctor was going through his records, stated “If you would have told me a year ago that you were going to go off all of your blood pressure medications, I would not have believed you could do it…Remarkable!…AND you no longer have kidney disease…Remarkable!…May I ask…How did you do it???”

Fast forward to today, and although Rich still has health challenges from time to time, at times requiring hospitalizations, on the whole, his overall health continues to be quite remarkable (at 85!) and is an inspiration to all who know him.  His determination to “strive to thrive” was my inspiration to start my own non-profit organization.

One of the main things I did for my husband was to make sure he could still garden. He always loved to garden and I didn’t want being stuck in a wheelchair to hold him back. Under Rich’s planning and guidance, the “Miller Garden” continues to flourish. It has raised beds containing herbs and vegetables, and it’s surrounded by lots and lots of pollinator plants. It was through our garden and my direct involvement after his stroke that I discovered an incredible world that had been right under my nose — the insect world.

So, between improving and maintaining Rich’s health and becoming a “bug lover,” my two “paths” merged and in 2020, I created Strive 2 Thrive Coulee Region in order to share my passions with my community — personal and community health and a healthy environment.

Shortly after my encounter with the captivating and alluring widow skimmer, I started to use my phone for more than phone calls and texting. I found the iNaturalist app and the amazing “world of iNaturalist observers, scientists and enthusiasts – like me!” I then learned about iNat’s community projects called BioBlitz and it occurred to me that we live in the perfect area to involve the community in “bioblitzing,” a great way of connecting residents with the natural world around them (see quote from E.O. Wilson below). The coulee and driftless regions have some of the most unique “creatures” (both fauna and flora) in the country, so in early 2021, I began the process of putting my “dream” of promoting a healthy environment via a bioblitz community project into a reality and through my S2T grant, “enlisted” Erica Black as the first coordinator!  I also reached out to some of my old contacts, I made a few new ones, and lo and behold, amid a global pandemic, The Driftless Area BioBlitz (DABB) was formed, an ongoing data collection project that uses the iNaturalist interface.

I’m thrilled to say that Strive 2 Thrive Coulee Region has partnered with WisCorps, Mississippi Valley Conservancy, and the UW-L Biology Department — we held three successful bioblitz events this past year and we have great plans for 2022! As DABB Partners, we set agendas for events and assist with promoting, staffing and planning bioblitz events. Note: This past year we also had assistance at the events from UWL Environmental Studies capstone student, Brooke Wehseler. Brooke was also the first writer for the newly created DABB Bytes blog and did a great job!  I’m also thrilled that they all share my and Erica’s passion and excitement in bringing “bioblitzing” to area residents and in so doing, helping to promote Strive 2 Thrive’s vision of a “community that strives together thrives together.”

Well, that’s enough about me. I really hope you’ve “caught” some of my passion (or you already had it before – in which case that’s FANTASTIC!) and will join us in 2022 to hunt down and digitally “capture” bugs, fungi, plants, birds, and whatever else you find while out in nature.

“You teach me, I forget. You show me, I remember. You involve me, I understand.”